I’m sure everyone’s excited about the DSi and the new Punch-Out!! and the Chibi Robo Wii port and all, but the big news I took from Nintendo’s recent flurry of press releases was Iwata’s announcement that we will finally be able to play Virtual Console and WiiWare games from external storage!

This is the best thing that could have happened for my Wii.

See, I haven’t been playing much Wii these days. In fact, I haven’t been playing any Wii for the past few months. It’s not for lack of desire either. I’m extremely eager to pick up Mega Man 9 and Strong Bad’s Cool Game for Attractive People and play them all hours of the night, I really am. But my Wii’s 512MB of internal storage filled to capacity a long time ago, and I really didn’t care for Nintendo’s original “delete old stuff” recommendation. Now we’ll be able to use SD cards to offset internal storage woes! And with 2GB cards being so cheap nowadays, this is going to solve my problem quite readily.

So I guess I’ll be playing these newfangled VC games some time around Spring ’09. No spoilers please.

My recent acquisition of LostWinds brought up an issue I was hoping I’d never have to deal with. As I attempted to purchase the title, I found that my Wii did not have sufficient storage space for the download! With much hemming and hawing, I deleted Paper Mario and made the purchase, but I know I’m gonna go through the same process when Strong Bad’s Cool Game for Attractive People is eventually released (BOO DELAYS).

What is Nintendo’s solution to my predicament? Delete more old games to make room for the new.

Sorry Nintendo, but YOU’RE WRONG. This is an absolutely terrible solution. I know I can always go back and redownload the games I delete for no additional charge, but this silly tinkering goes completely against the spirit of your home console that’s easy for everyone to use. The entire Internet probably agrees with me that you need to start using those USB ports on the back for an external storage solution. I’m talkin’ USB hard drives here. If we could simply plug in a hard drive externally and run Virtual Console and WiiWare titles from it, all my problems would be solved.

The reason I bring this up on my fancy Interblog instead of just mumbling and grumbling about it offline like I have been for the past few weeks is because of something I read on Games Are Fun today. Apparently Nintendo is hiring hardware and software testers with a focus on those underutilized USB ports! This is potentially awesome news, because my powers of conjecture and random guessing lead me to assume that support for USB hard drives is 100% definitely in the works. I would even be happy buying a special Nintendo-branded hard drive if it helped me achieve my dream of storing all my digital Wii downloads in one place!

You listening Nintendo? Obviously you are, but I’ll reiterate: I will give you money for the ability to run games from a USB hard drive. Right now you are giving up money. That’s just bad business really.

(courtesy of Games Are Fun) 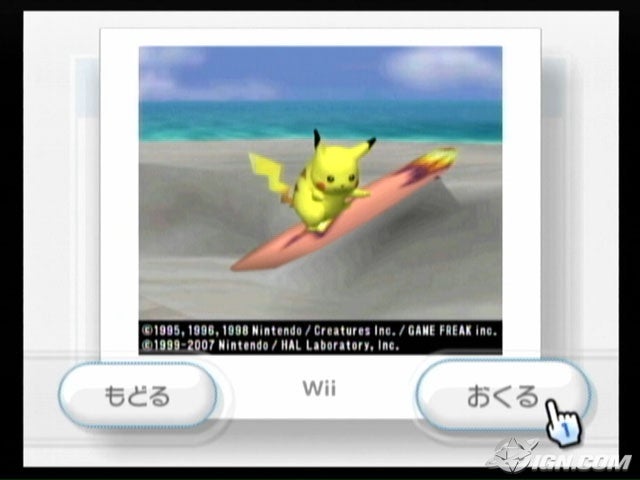 Huh, can’t say I expected something like this (though I did kinda hope). According to IGN, the Japanese Virtual Console release of PokÃ©mon Snap (a wonderful and underrated N64 game where you try to take the best possible photographs of PokÃ©mon in the wild) will be updated to include the ability to send your photos to friends via the Wii Message Board! I absolutely loved this game back in the day, and would buy it up immediately, if the game ends up over here as well. I’m assuming it won’t offer some kind of magic Wii Remote pointer integration as well, but the analog stick worked just fine for its purpose. Even if you didn’t care for the original game, this is pretty exciting news! A Virtual Console game is getting a Wii overhaul! Dare I dream for eventual online multiplayer updates? I probably shouldn’t dare, but I do anyway. Just a little.

For the record, I totally side with Tycho’s stance on the matter (I probably sided with him before he even said it in the comic): game reviews with numerical values are pretty much meaningless when it comes to classic titles.

So to summarize this post: this game is fucking Lode Runner. Any fans of the Lode Runner games (ones that own a Wii, anyway) should grab it up immediately, and for shame on you for not noticing its availability on the Virtual Console sooner.

For everyone that hasn’t played before, for whom the self-evident sentiment above is meaningless: Battle Lode Runner is a game worth playing. It has dinosaurs, robots, gold… uh, Chinese guys… The object of the game is to collect all the gold in the level and escape before the enemy du jour makes physical contact with you (game heroes are such xenophobes). The only means you have of protecting yourself (beyond running away like some kind of coward) is to dig a hole in the ground. If an enemy falls in the hole, they’re temporarily incapacitated, giving you a chance to dance on his stupid head. That pretty much describes it! Go get ’em! The puzzles quickly get downright insidious, so you’d better get the game mechanics down fast.

I used to play a great Mac version back when I worked at a daycare center (I watched kids sometimes too! Honest!), so I was thrilled at the opportunity to grab up a nice classic version on the Wii.

The NES version is okay, but the Turbo-Grafx 16 edition is better-polished and includes more robust multiplayer modes for only a dollar more. IGN’s review (I was curious) says you should get it because it was the first VC title not previously available in the United States, but that’s stupid; you should play it because Lode Runner is a great game that deserves more than the relative obscurity it has fallen prey to, and Battle Lode Runner is a solid entry in the series.

I’m sure everyone’s read by now that The Legend of Zelda’s arguably most-loved title in the series, Ocarina of Time, has finally made its way to the Virtual Console (in the UK; the US will get it on Monday).

Can I be the first to say: Who really cares?

Yes, Ocarina of Time, or “OoT” to its friends, was a great N64 title. It was one of the reasons I was so psyched to get the system back in the day (I can’t believe I’m already referring to the N64’s time as “the day”, but it really was two gaming generations ago). But between the original (shiny gold) cartridge and the Master Quest and Zelda Collector’s Edition GameCube disks, I’ve pretty much had my fill of the game (and can even play those last two on the Wii directly with no fuss). I can’t be the only one in this position of owning the same game too many times already, and not wanting to drop another thousand Wii Points just so I can flaunt my ability to beat the puzzle to reach Gohma (SPOILER ALERT FOR YOU ZELDA 64 NEWCOMERS: “Twenty-three is number one!”).

Unfortunately (fortunately?), it’s pretty much the same story for me with much of the rest of the Shop Channel, at least as far as the Nintendo fare is concerned. No matter how much I love to blast through Super Mario Bros., I’m not going to pick it up when I already own the NES cartridge as well as the Super Mario Bros. DX remake on Game Boy Color. Donkey Kong Country? I’ll just fire up the ol’ SNES, thank you very much. I won’t even think about picking up Zelda II: The Adventure of Link whenever it becomes available (you don’t wanna know how many of those I’ve got). The Legend of Kage? I-

Well, there might be a few Nintendo games I need to pick up.